How can neuroscience research help children affected by poverty?

The main question discussed was how neuroscience research may be used to address neural cognitive and emotional problems which are associated with childhood poverty, especially in the third world.  Each panelist communicated his/her own research as well as other relevant work on the topic (a recent review can be found here).  For example, several studies have demonstrated that childhood poverty influences neural development and correlates with low socio-economic status ("SES") (typically based on income, material resources, education/occupation, violence, exposure to toxins, parental care, etc...) in adulthood.  This correlation is not surprising since children who are raised in poverty-stricken homes tend to have access to low-quality education, poor nutrition and other harsh environmental conditions.  The panelists also asked whether poverty ought to be measured in terms of family income and other monetary measures or by less tangible factors such as "quality of parenting."

Brain plasticity:
A property of the brain which must be taken into consideration when addressing these issues is its ability to be plastic.  In particular, different systems in the brain can adapt and strengthen/weaken their internal connections through different experiences.  Neuroscience research has discovered that, for some brain networks (e.g. visual or language system), early life experiences are critical, while other systems continue to develop later in adolescence and adulthood (e.g. executive center).  Thus brain plasticity allows us to be vulnerable as well as resilient depending on environmental influence.

Evidence (Sociological, psychological and epidemiological studies):
Research in humans and in animal models suggests that SES affects brain development by influencing factors such as prenatal environment, parent-child interactions and cognitive stimulation in the home.  Studies have demonstrated that intelligence (based on IQ tests) and educational achievement is lower in children living in poverty.  Interestingly, children from low SES homes also have relatively lower social and emotional intelligence.  Although most of these studies are correlational, there is causal evidence as well.  For example, causal links have been found between low SES homes and physical/somatic factors, environmental toxins and prematurity.  Discovering such causal links is crucial because government and policy-makers are guided and motivated by evidence which is based on rigorous scientific investigations.

Evidence (Neuroscience studies):
As opposed to sociological and epidemiological studies, neuroscience research can identify the underlying cognitive systems that are influenced by SES.  It can also shed light on the mechanisms, whose understanding may enable us to design specific interventions to prevent the effects of low childhood SES.  In general, the largest effect of SES are on language processing and moderate effects have been observed in working and declarative memory processing as well as spatial cognition and cognitive control.


Language:
Studies have shown effects of SES on vocabulary, phonological awareness and syntax.  There is a decreased specialization of language processing in the left brain hemisphere in children with low SES (Raizada, R. D. S. et al., Neuroimage, 2008).  Another study has shown that low-SES children do not recruit the prefrontal cortex attentional system to the same degree as higher-SES children (Kishiyama, M. M. et al., J. Cogn. Neuroscience, 2009).

Emotional and social:
A study of college students has revealed that low-SES is associated with an increase in amygdala response to angry faces (Gianaros, P. J. et al., Soc. Cogn. Affect. Neuroscience, 2008).


Economics and Policy:
The issue of "prevention" vs. "remediation" was also brought up during the social issues roundtable.  Today hundreds of billions of dollars are being spent on remediation - intervening in adulthood to alleviate conditions underlying low quality of life (e.g. depression, addiction).  Policy makers must determine whether it is in the government's best economic and moral interest to intervene later in life or prevent the negative conditions from ever taking place.  According to Dr. James Heckman, it is not a question of morals or ethical principles.  It would actually cost less if the government allocated funds on prevention by intervening very early in a child's life (i.e. early childhood education).  Thus a moral vs. cost tradeoff does not really exist in this case!

Conclusions:
SES has been generally ignored in neuroscience, probably because of the difficulty of controlling its numerous components.  However, recent studies have initiated this endeavour, and now, many believe that SES may be understood by studying the underlying neural mechanisms.  Unfortunately, only a few studies have provided useful and robust results.  Therefore, future research is crucial to corroborate previous results and develop ideas of effective interventions.  By identifying the brain areas affected, we would be a great position to develop training programs (e.g. game-based strategies) which can target particular neurocognitive systems directly.

To learn more, visit Changing Brains
Posted by thekhawaja at 9:54 PM No comments: 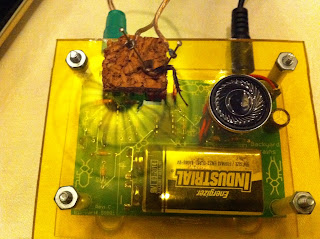 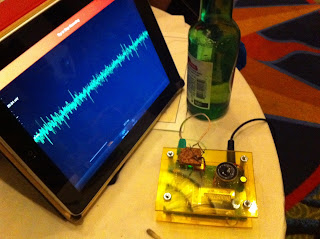 Backyard Brains (based in Ann Arbor, MI) has developed an easy to use bioamplifier for neuroscience electrophysiology experiments (see pictures above).  They essentially have a cockroach leg connected to a circuit, through which they can record and hear the electrical activity (spikes) from the sensory nerves of the cockroach leg!  There is even an iPhone application that lets students store the data.
Check out the following videos to see how it works.  Enjoy!
- How the system is setup.
- Spiking activity can be visualized when the cue-tip touches the cockroach leg.
- You can also hear the spikes though a speaker.
- This is my favorite: The cockroach leg "dances" to music!!!
This system has allowed junior high, high school as well as undergraduate students to learn about neuroscience and have fun at the same time. What a great way to teach. Bravo!
To learn more about the system and its designers, visit Backyard Brains
Posted by thekhawaja at 4:48 AM 2 comments:

What a great kickoff to SfN 2010 with the Dialogues between Neuroscience and Society talk! The purpose of this presentation, by Hollywood actress Glenn Close and her family, was to bring change to how people perceive mental illness.

Glenn spoke about the psychiatric conditions of both her sister Jessie, who has bipolar disorder, as well as Jessie’s son, Calen, who suffers from schizo-affective disorder.  It also highlighted the impact these mental illnesses had on the lives of her family.  About two and a half years ago, Glenn founded Bring Change 2 Mind, an organization whose purpose is to remove the stigma associated with mental illness and to help patients lead a balanced and productive life.

Glenn was a sensational speaker! She was witty, funny, charming and very engaging with the audience.  Did you know that she comes from a family of Neuroscientists?  Wow! Did you also know that she was the first (named) female to have her genome sequenced cover-to-cover! Wow^2!

Glenn spoke about the prevalence and influence of mental illness in the world, as it affects 1 in 4 families in one way or another.  Mental disorders and other such conditions are stigmatized in society and she stressed the importance of bringing change to such harmful perspectives.  To address this issue, Glenn, teaming up John Mayer and Ron Howard, organized an outstanding event at Grand Central Station, which may be seen at http://www.bringchange2mind.org

Glenn’s talk was brought to a close as she stated, “mental illness is a global family affair and our heredity connects us all.”

And then, a very well deserved standing ovation… Awesomeness!

The Society for Neuroscience (SfN) meeting will be held in San Diego this year.  This year's meeting promises to be an excellent platform for Neuroscientists from multiple disciplines to share knowledge about their research, gain feedback, as well as discover novel ideas. The SfN meeting will also act as a social venue for networking amongst fellow scientists.

As in previous years, the SfN is promoting several public outreach programs including Brain Awareness Week (BAW).  BAW is an international campaign to increase public awareness about the importance of neuroscience research.  Every Spring, universities, elementary/secondary schools, hospitals, professional associations, government agencies and service organizations work together to organize a variety of events during BAW to celebrate neuroscience research.  This year is extra special since we are celebrating BAW's fifteenth anniversary!

Several creative and exciting activities are featured during BAW to introduce people of all ages to the brain and its research.  BAW events include open houses at research institutions, scientific cafes to engage the local community, workshops at elementary and high schools and much more!

For more information about BAW or to find out how you can get involved in your local area, please attend a BAW poster presentation at SfN, San Diego 2010! Bring your colleagues as well!

For more details about BAW, visit the Dana Foundation website at:
http://www.dana.org/brainweek/

thekhawaja
I am a PhD Candidate at the Montreal Neurological Institute, McGill University. I study the neurophysiology of visual motion perception at Dr. Christopher Pack's laboratory.